In the last decade cannabis industry has experienced an exponential explosion in the number or available strains as well as the quality of those strains and the overall cannabis movement has become unstoppable. And there have also been some noticeable new advancements in this industry and one of the most well known is the advent of autoflowering cannabis strains that started with The Joint doctor and his experimentation with the wild ruderalis genetics. Autoflowers have many advantages for small scale growers as well as for stealth grows and these small plant grows much faster and can produce more turnover and more harvests in the same time period as photo-sensitive plants. With autoflowers you don’t need two separate vegging and flowering rooms and you can blast them with light for 24 hours every day to maximize their growth. But autoflowering plants can’t be cloned so you need to always start them with new seeds and if you are buying those seeds for every grow then that can quickly become quite expensive. And that is why many autoflower growers are starting to produce their own seeds as well breed their own strains to minimize their losses and produce new and exiting auto strains.

The first thing you need to learn is how to make autoflower seeds as that can greatly reduce your up front costs for each individual grow. When you are making autoflower seed every female can create more than a hundred seeds but in optimal growing conditions one plant can make more than a thousand seeds and that stash of beans can last you for several years. Of course with simple and natural pollination all the seeds you will make will be regular and that means they will have a 50:50 chance of being male or female. Those regular seeds can be a bad thing if you have to always grow out more plants and remove those males before they can pollinate your females. But you can use some more advanced growing methods using colloidal silver to create feminized seeds but those methods are usually reserved for advanced growers and that is why I will not include them in this simple beginner guide.

If you are growing autoflowers you should know that cannabis plants come in both male and females sexes and only the female plants are the ones that we grow for their flowers and for that precious medicine inside them. But if you want to create your own seeds you need to grow both males and females so that those male plants can pollinate your female plants and they can produce seeds. In nature this process happens naturally where male pollen is released from their pollen sacks and with the help of wind is transferred to the female plant flowers. But when we are growing plants indoors we usually like to take everything in our own hands and that is why you can select the best male and the best female plants to get the most desirable results and manually apply that pollen to all those female flowers. If you do that properly then in a couple of weeks you should have fully matured cannabis seed inside your autoflower plants that you will be able to store and use for later grows.

With general photo-sensitive plants the process usually ends here and you can simply cross any two strains and get a bunch of offspring that will have some genetic traits from both parents. But with autoflowers it is not that simple because that autoflowering gene is a recessive trait and that means you need to learn more about plant breeding and gene inheritance to create proper autoflowering seeds.

Plant breeding is the science of manipulating and changing various different traits and characteristics of a plant in order to get a more desirable outcome. This process in it’s simplest form is a selective plant cross-breeding to get an offspring with the traits that the grower wants. This process can happen over multiple generations with in-breeding and cross-breeding as well as backcrossing multiple offsprings to lock in those traits that the grower wants in his plants. We need to learn how this process happens because the autoflowering trait or gene in most cases is a recessive trait and that means it is less likely to get passed and expressed in the offsprings. And because of that fact you need to understand how genes are passed and how can you create a strain that expresses this recessive autoflower trait.

If you want to create your own autoflowering seeds the easiest method is to cross two stable autoflowering plants and preferably both from the same species. This way you will have very stable offspring because there is no new traits being introduced and that means all those desired plant characteristics would be Homozygous(stable) and you will not need to worry about multiple cross-breeding cycles.

If we look at the third table above we can see that there is a cross between a stable recessive autoflowering trait plant (aa) and another stable recessive plant (aa) and that means that 100% of those offsprings will also be autoflowering and that is great for seed production. You can just order any regular autoflower seeds and grow them out, pollinate those females with the male pollen and get hundreds and hundreds of new regular autoflowering seeds. Because autoflowers usually take less than 70 days to flower theoretically you can start growing your next batch or home grown seeds in less than three months from ordering those first beans. And because you can get more than a 1000 seeds from one autoflower plant you will have a huge inventory of beans to keep your continuous grow operation going and every time you plant those seeds around half of those plants will be males. From those males you can manually pollinate a couple of branches on some female plants and get a continuous supply of, not just a decent home grown cannabis, but also home grown seeds that can be used for future grows.

At first this method of creating your own seeds feels a bit tricky but when you get the hang of it you can save a lot of money because autoflower seeds are not cheap and especially those feminized seeds as they can cost as much as 10$ for one bean. But when you make your own seeds the only expenses will be electricity, growing medium and nutrients but that is nothing compared to those saving that you will get creating your own autoflower seeds! 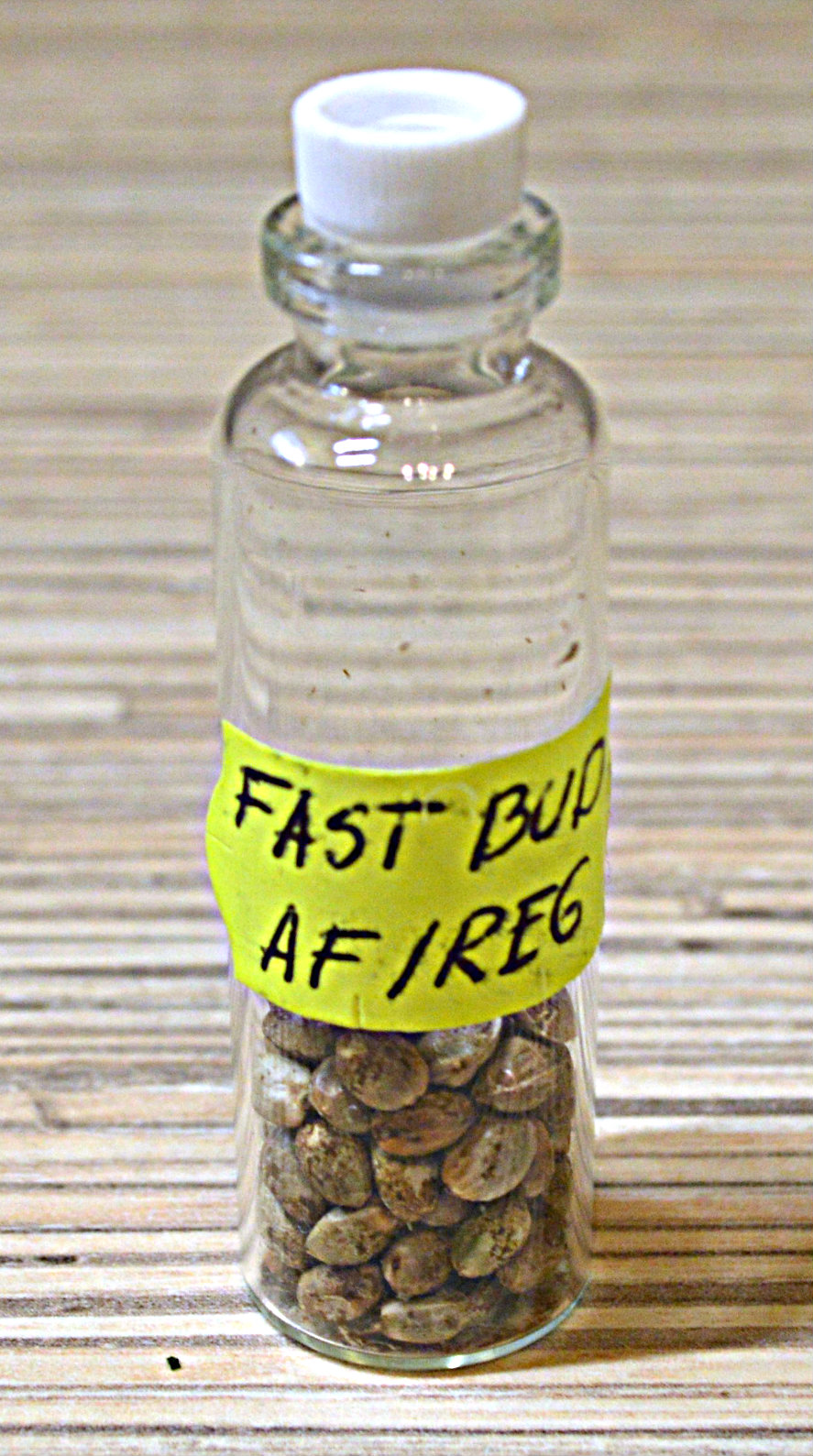 If, however, you want to create a completely new autoflowering strain crossing a regular photo-sensitive plant with a stable autoflower strain then things get a bit trickier. You will have to make multiple generations to stabilize these new strains and that can be expensive and time consuming but if you have the energy and time then this is how you can do it:

Of course in nature it is not that simple but in general these punnet tables can give you a great starting point and an approximate knowledge of how much plants should show you those desired autoflowering traits. In real world growers usually do at least 5 to 8 generations to completely lock in those autoflowering genetics and because we need not just that autoflowering trait but also a great yield and other desired genetic variations then that process becomes much more difficult and time consuming.

For example, to get some additional desired genetics from those original mother plants you need to do a backcrossing taking some stable recessive third generation(f3) offsprings and breeding them back with those first generation offsprings. In the table below you can see that the autoflowering recessive trait would become Homozygous in around 50% of the offsprings of this backcrossing experiment and then you would need to one again breed two plants together to get a fully autoflowering offspring collection. 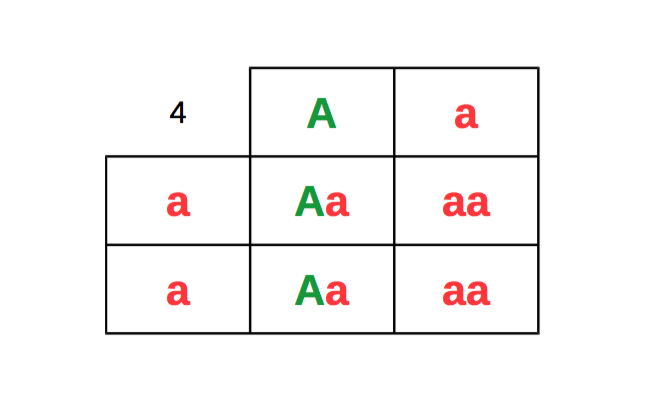 But because you don’t just want to get that autoflowering trait but some other characteristics like great yield, good potency or good mold resistance then you need to do a dihybrid mendelian analysis and the Punnett table for such a thing is much more complicated and you get something like the fifth table below. Here you can see that we have plotted two different traits – AA, aa and BB, bb where AA stands for photo-sensitive trait, aa stands for a recessive autoflower trait, BB stands for low THC concentration and bb stands for a recessive high THC concentration. As you can see from examining that tables a desired cross with both recessive(autoflower and high THC) genes expressed you will get in only 1/16 or 6.25% of those offsprings in the lowest right corner. And that is only for two traits, so imagine if you wanted to select for more than two traits, the table would get huge and the percentage rates would drop accordingly. Of course not all the desired traits are recessive and that somewhat increases the odds because looking at the table below if for example that High THC trait would be dominant and you wanted a “B” and only the recessive “a“(autoflowering) trait then you can use all the children that have Homozygous autoflower trait (aa) and that is 4/16 or 25% of all those offsprings, that are located in the lowest 4 right-side squares.

As you can see breeding is not easy and to do it properly you need to perform a lot of experimentation and you need to create many generations of plants to lock in all those desired traits. Luckily autoflower plants grow much faster than regular photo-sensitive strains and that means you can get as much as 6 generations of plants in one year. And in a couple of years you could have a very stable strain that can be used over and over again each time producing more and more stable offsprings and giving you a more uniform yield. Theoretically you can get a new, fully autoflowering, strain with as low as 3 or 4 generations but usually you will need to do at least 5 to 7 generations to stabilize those genetics and that is why in the recent years there have been multiple autoflower strains that have flooded the market and that were not yet stable and produced a wide variety of phenotypes. And because of that it is best to buy an older and more stable strain seeds as those breeders have had time to perfect their breeding methods and create more stable hybrids.